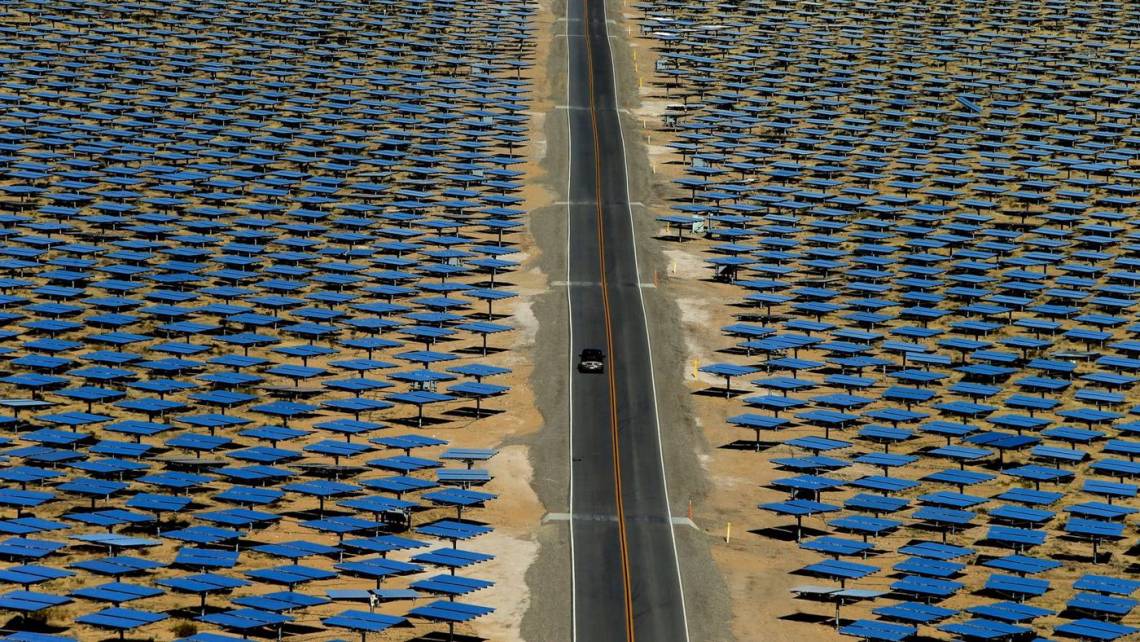 The Trump administration on Monday announced a decision to impose new tariffs on cheap, imported solar panels, which industry experts say could slow U.S. installations by as much as 11% through 2022. (Mark Boster / Los Angeles Times)

Fees on solar panel imports imposed this week by the Trump administration threaten to increase customer costs and cut solar energy growth by as much as 11% over the next five years, but the industry remains optimistic that the roadblock will be temporary.

The new tariffs probably will add about $650 to the average solar power system a homeowner would buy, said Bernadette Del Chiaro, executive director of the Solar Energy Industries Assn. But the added cost is unlikely to stop consumers and businesses from going solar or force solar companies out of business, she said."I think in the long run, there's no turning back," Del Chiaro said. "Consumers have already gotten a taste of what it means to have control in their world. It just has the effect of potentially slowing us down."

Analysts at GTM Research, a division of Boston-based Greentech Media, estimate that the federal government's decision to impose tariffs on cheap, imported panels, which have fueled the industry's explosive growth, will mean a cumulative reduction in solar installations of about 7.6 gigawatts, or 11%, through 2022 compared with what would have been installed without the levies.

The analysis found that the big utility-scale solar power systems would be hardest hit by the tariff, which starts at 30% and decreases 5 percentage points each year of the four-year fee.

Emerging solar markets in Southern states such as Texas, Georgia, South Carolina and Florida are expected to be heavily affected by the tariffs, which are intended to bolster domestic production and sales.

For California, the nation's leader in solar power installations, the move presents an impediment at an inopportune time.

Rooftop solar installations through the end of November, the latest figures available, showed a 13% decline compared with the same period in 2016.

"The overall effect is a meaningful but not destructive reduction to expected solar installations in concert with modest improvements to a still challenging environment for domestic solar cell and module manufacturing," said M.J. Shiao, head of Americas research at GTM Research.

Two U.S.-based firms filed the case for tariffs at the International Trade Commission, arguing that their businesses have been hurt by cheap imports from Asia and Europe, which produce some 90% of the solar panels installed in the U.S.

In a 4-0 decision last month, the commission voted in favor of imposing the tariffs to prevent the demise of U.S. solar panel manufacturing, although the tariffs are not widely viewed as helping to salvage the nation's struggling panel production industry.

Harner told the commission that over the last five years, he had witnessed a 50% drop in solar panel prices, which led many companies to use foreign imports. And that, he said, has contributed to driving U.S. companies out of business.

In addition, Harner said he is concerned about the quality of the products from the foreign manufacturers.

"This might cut out some of the riffraff," Harner said. "All in all it kind of keeps the industry honest."

As for the increased cost to consumers, Harner argues that the price of electricity from the utility companies continues to rise too. So slightly higher solar panel costs will still be a good deal for consumers, he said.

"I would argue the price of panels has been artificially low," Harner said. But Del Chiaro and others said the tariffs add another hurdle for clean energy.

California mandates that 50% of the state's electricity generation come from clean energy sources such as solar and wind power by 2030. Some have pushed for 100% clean energy. A significant driver has been homeowners and businesses installing solar on their rooftops.

"It's a speed bump," Del Chiaro said of the tariffs. "It's sort of one thing after another. The goal posts just keep getting moved for this industry." But so far, Del Chiaro said, she does not hear any panic from her association members — and doesn't expect to.

"My phone is not ringing off the hook with people sending in their resignation," she said. "I don't want to see some frenzy that solar is just too expensive. Because that's just not true."