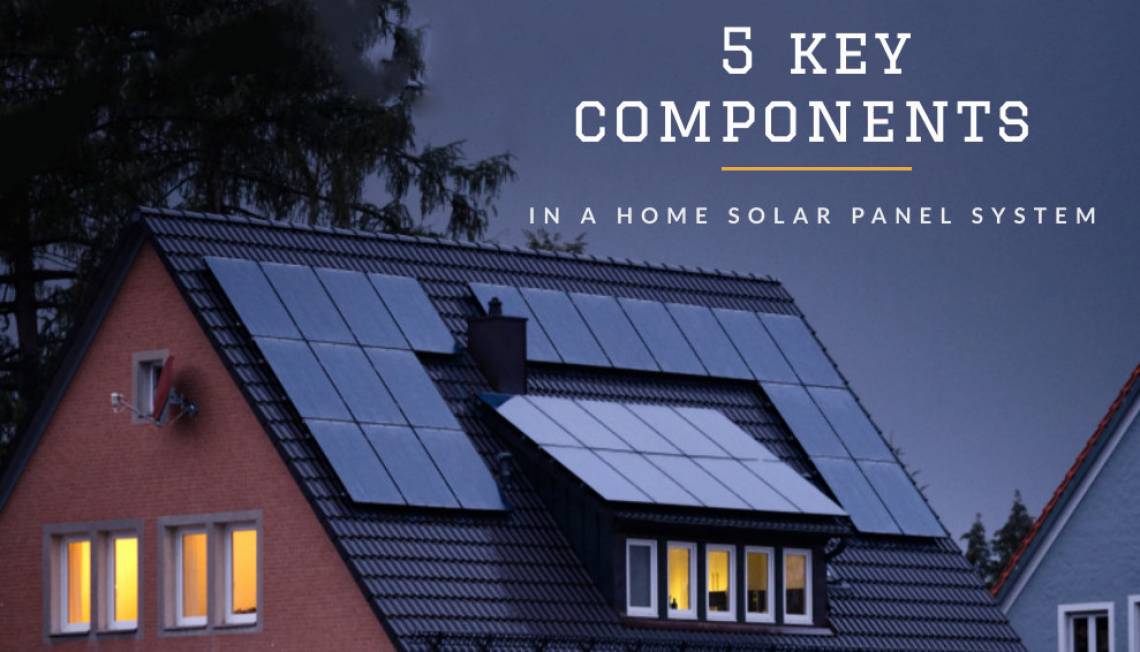 What are the components of a solar panel system?

At Green Solar Technologies, we make solar look easy. But have you ever wanted to hear a breakdown of all the components that make up solar panels? Even though it may seem like magic, it’s actually science and engineering. There are 5 key components in a home solar panel system: solar panels, an inverter, an electrical panel, the power grid, and the sun. In this blog, we'll walk you through how each component works together to create a complete solar panel system.

1. Solar Energy is harnessed from the sun

Every solar system collects energy from the sun. A solar system does not create the energy, but instead converts energy from the sun into electricity your home can use. A standard solar panel consists of a layer of silicon cells, a metal frame, a glass casing, and various wiring to allow current to flow from the silicon cells. Silicon is a nonmetal with conductive properties that allow it to absorb and convert sunlight into electricity. When light interacts with a silicon cell, it causes electrons to be set into motion, which initiates a flow of electric current. This is known as the “photovoltaic effect,” and it describes the general functionality of solar panel technology. That means as long as the sun is shining, your panels can generate energy. Even on cloudy days, your panels can still generate electricity thanks to the sun's rays breaking through the clouds.

The photovoltaic process begins with the silicon photovoltaic solar cell absorbing solar radiation. From there, the sun’s rays interact with the silicon cell and electrons begin to move, creating a flow of electric current. The panels generate direct current (DC) electricity when sunlight touches it. The amount of electricity a panel can generate depends on many factors, including but not limited to, the type of panel, placement of panel, time of day, and temperature. The best way to determine the amount of energy a panel can produce is by looking at the efficiency rating. Basically, the higher the efficiency rating, the greater the potential is for more energy production.

3. The Inverter converts the energy

Once the solar panels capture absorb DC electricity, it then must feed it to a solar inverter. The grid, and appliances in your home, run on alternating current (AC) electricity. Therefore, inverter must take the DC electricity collected from your panels and convert it into AC electricity in order for it to create usable power. There are two common types of inverters: string inverters and microinverters. A string inverter is mounted to the side of your home, and it collects all of the electricity generated by your system in one place. Microinverters are small components that are attached to the underside of each individual solar panel; which allows DC to be converted to AC right at the panel. GST offers both inverter systems, so for more information on which inverter system is right for you, talk to your solar adviser.

4. Your home is powered by solar

5. Power is sent to the grid

If your panels are generating more electricity than your home uses, excess energy can be sent to the grid. On the other hand, if you are using power at times when your panels aren't producing electricity, or using more energy than your panels produce, energy will be drawn from the grid. That's where the electric meter comes in. The meter measures the flow of electricity in and out of your home, allowing homeowners who have invested in solar to offset their energy bill every month.

Bonus: Store energy for later use with an Energy Storage System!

Rather than sending excess energy to the grid, an Energy Storage System (ESS) allows you to store excess electricity to be used at a later time. The energy stored by an ESS, such as a solar battery, can be used at any time of day, but is particularly helpful when your panels are not generating power (such as at night). In addition, you can rely on an ESS for uninterrupted power, even when the grid is down, so they come in handy if you're prone to power outages. This is an optional feature that can be added to your solar system.
For information tailored to your home, let us connect you with a dedicated Energy Advisor. There's never been a better time to go solar. Click here to get your free quote today!
Previous
Next