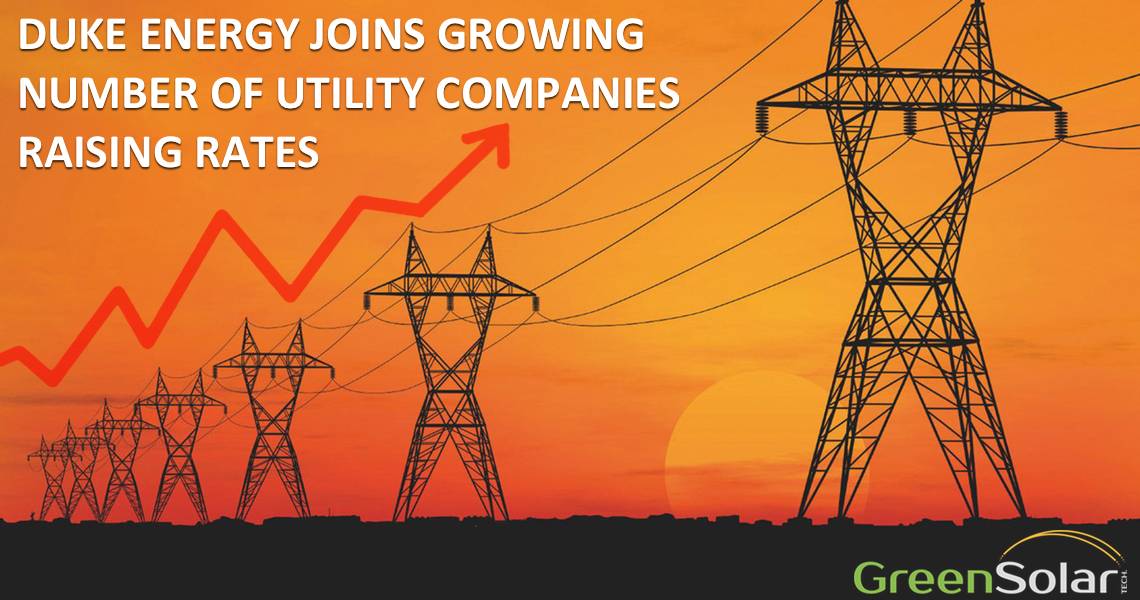 Duke Energy Progress is proposing a likely 16.7 percent rate increase for residential customers in NC—a record hike since it was called Carolina Power & Light in the 1980s. If the rate increase is fully-approved, residential customers could see their bills increase from an average of about $105 to $123 per month, adding about $216 over the coming year in additional power costs. Commercial and industrial customers would see an increase of 13.5 percent. The average across all customers would be 15 percent by the start of the new year. The power company made the filing with the N.C. Utilities Commission last week. The review, hearings, and legal proceedings may last through the winter before the Utilities Commission issues a decision. Duke Energy Progress is asking the Utilities Commission for a ruling in time for the new rates to go into effect Jan. 1, 2018. This only gives its customers a little over 5 months to decide if they wish to stay and pay the price increase or consider alternative means of energy for their home or business.

Duke Energy spokesman Jeff Brooks explains that residential customers commonly cover the brunt of electricity costs because it costs the utility company more by the kW to provide individual household service. Duke Energy Progress has 1.17 million residential customers, 200,000 commercial customers, and about 3,500 industrial power users on its system. That is close to 1.5 million accounts about to cost more money for the same services. This is a trend that is happening all across the country (with Duke Energy and Lakeland Electric in FL, Commonwealth Edison in IL to name a few) as inflation decreases the dollar’s purchasing power and conventional forms of energy become increasingly more scarce. For these reasons and others, millions of home and business owners have opted out of the old dinosaur system and are choosing solar technology as a way of positively transitioning with the times and claiming their energy independence.

Some consumer advocates, environmental groups, and potentially corporate customers however who have not learned of the short and long-term benefits of switching to renewable energy are choosing to stick it out and challenge the domineering power company, hoping to at least slow the rate of increase of their electricity costs. One of the grounds for upheaval is Duke Energy Progress’s plan to charge its customers $195 million for five years to begin recovering its costs for moving coal ash from open-air pits to lined landfills, as required by the state’s Coal Ash Management Act of 2014. Duke Energy Progress is excavating ash from its Asheville plant and moving the waste to a site in Georgia. It is also moving ash from its L.V. Sutton Plant in Wilmington and moving the material to Chatham County at the Brickhaven Mine in Moncure. The company has already moved about 7 million tons and has about 7.8 million tons to transfer to meet a state-imposed August 2019 deadline.

“A lot of people will make the claim that this is Duke’s mess, so why should we have to pay for it?” Brooks said. “The cost of complying with state and federal regulations is traditionally paid for by the customers.” Yet even as he says this, solar power generation systems have and continue to become cheaper and more efficient over time, and now they are almost a guarantee ROI within the first two years for those who make the switch. This means the people hold the controlling interest of the market value of energy production, and the cost of complying with state and federal regulations may fall back upon Duke Energy to prove it is still a relevant company in the modern age of solar power.

Has your electricity bill gone up lately? Most power companies increase their rates 7–10 percent every year.  If you are a home or business owner, this is a cost you do not have to keep paying. Click here for a free quote and see how much you can save going solar today!