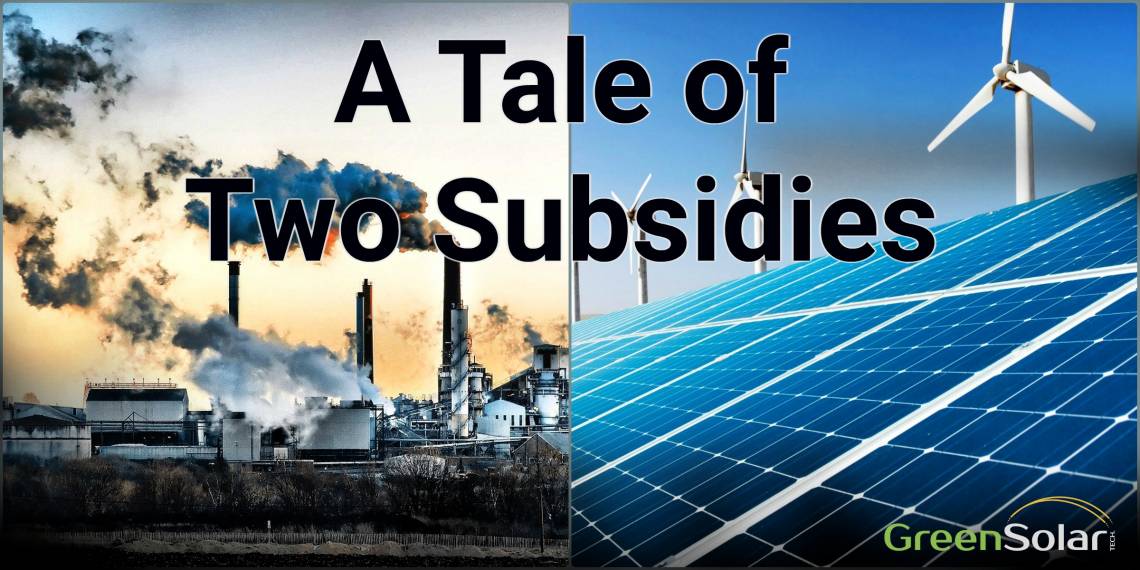 This week, Administrator Scott Pruitt of the Environmental Protection Agency expressed his clear opposition toward the federal tax credits currently in place for the renewable energy industry with these harrowing words: “I would do away with these incentives that we give to wind and solar.”

He continued, “I’d let them stand on their own and compete against coal and natural gas and other sources, and let utilities make real-time market decisions on those types of things as opposed to being propped up by tax incentives and other types of credits that occur, both in the federal level and state level.”

This kind of technology-resistant talk comes as no surprise to those who have been paying attention to the federal government’s involvement in support of energy resources over the past century. Coal, natural gas, and oil have been practically the sole recipients of government tax breaks and handouts for as long as there have been any, averaging $5.6 billion annually (by today’s currency standards) for every year since 1918. What that means essentially is that fossil fuel energy has been subsidized at the rate of over $15 million per day, for every day since the end of WWI. Allow that to settle in.

In contrast, wind and solar have averaged only $421 million per year (by today’s currency) between 1994 and 2009, which averages out to $1.2 million per day. That’s 13 times less than fossil fuel subsidies. Before 1994, renewable energy subsidization was virtually nonexistent.

Now that we are bringing the reality of this issue into focus, let's call this little dichotomous travesty “A Tale of Two Subsidies.”

Continuing, just the aforementioned numbers alone may help us understand how the federal government has traditionally threw its hat in for the old standard of coal, natural gas, and oil, but really it goes deeper . . . much deeper. One could make the case that many of the U.S.’s involvement overseas have largely been incentivized by immediate access to the seizure of coal, natural gas, and oil in countries like Iran, Iraq, Syria, Kuwait, and Saudi Arabia—all recurring destinations of American foreign policy. This budget goes well into the hundreds of billions every year, about 100 times more than the subsidies. This is a roundabout way of doubling-down on fossil fuel energy and assuring its success over any possible alternative, regardless of the inherent benefits. But we have to let wind and solar stand on their own? One would have to wonder if Pruitt has incentives of his own to keep the status quo in place.

What wind and solar power have going for them in the way of government advantages is a federal tax credit of 2.3 cents/kilowatt-hour and a 30% write-off against your paid-in federal taxes, respectively. Yet this is not even the primary draw for most people who choose wind and solar. Proponents of renewable energy are by and large concerned with the viability and sustainability of their energy resources well into the future. They want to know there will be abundance, that they are contributing positively to their environment, and that they will retain their energy independence in a vastly uncertain and ever-changing world. Add to that list the fact that utility companies are prone to hiking their rates 7–10% every year and what you’re left with is a desperate dash to the nearest wind or solar installer to save you from the wreckage of the world’s depleting and increasingly more expensive forms of energy. Going green thereby becomes a no-brainer for your typical educated and fiscally-concerned home or business owner.

All this said, it should be noted that Pruitt did concede that any move to end the tax credits would be a “policy decision” for Congress, and “not an EPA decision.”

Perhaps if the controversial EPA Administrator would really like to see fair market competition between all forms of energy production, it would be best to not engage our military in any further conquests for oil and cut out all subsidies. The rebound effect to this will be a strengthened dollar and an American home and business owner more empowered to choose what is personally best for him or herself. We at Green Solar Technologies and our thousands of customers believe that choice ought to be solar power.

If you are a home or business owner and desire to take the helm of your energy production future, get your electricity bill ready and apply for a personalized free solar quote.