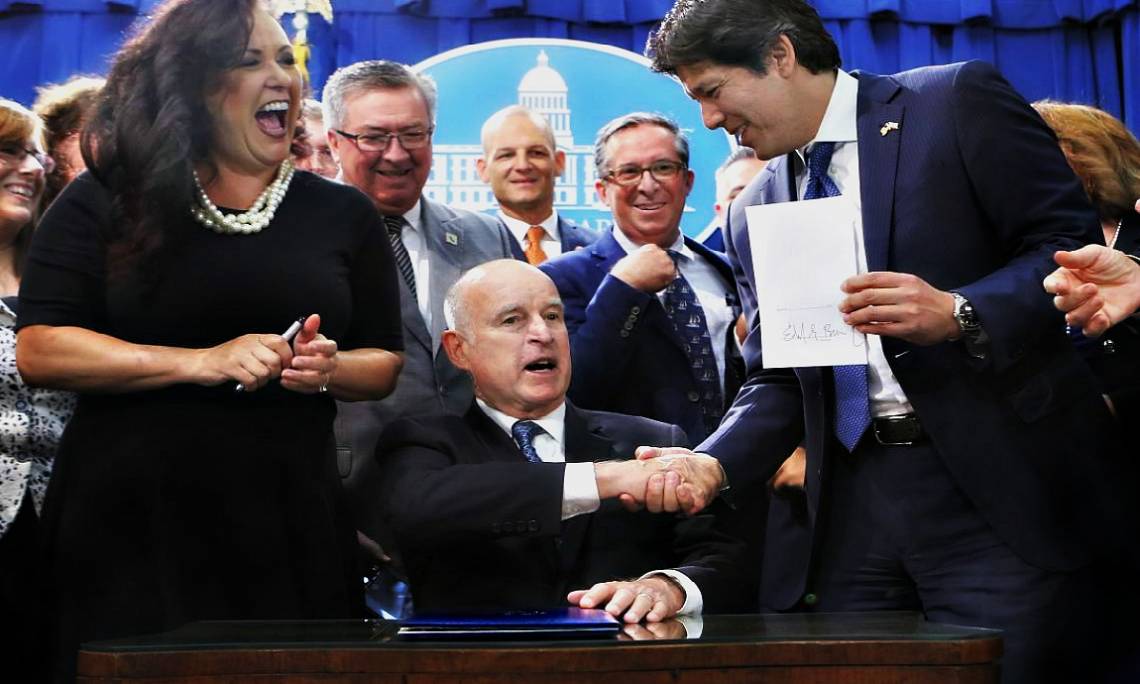 The state of California has made a bold declaration Monday, joining Hawaii as the only two states in the U.S. committed to 100% renewable energy by 2045. Gov. Jerry Brown signed a bill which builds to the momentum set by the state to offset the effects of climate change. The bill was authorized barely days before Brown’s hosting of a global conference on climate change in San Francisco, in a grand finale of gravitas to usher California’s leadership in environmental safety and long-term sustainability.

“California is committed to doing whatever is necessary to meet the existential threat of climate change,” Brown stated during a signing observance at the Capitol. “And yes, it is an existential threat. No matter what the naysayers may say, it is a real, present danger to California and to the people of the world.”

The obligation of the state in Senate Bill 100 by state Sen. Kevin de León (D-Los Angeles) is to obtain all of its electricity from clean sources—such as solar, wind, and hydropower—by 2045. The bill additionally requires that utility companies and other service providers generate at least 60% of their power from renewable sources by 2030, which is an additional 10% from its previous goal set for that date.

California isn’t new to the pursuit of renewable energy. In only the past two years, lawmakers in the Golden State have taken significant steps passing legislation obligating the state to reduce greenhouse gas emissions by 40% below 1990 levels by the year 2030, and to extend its cap-and-trade program to encourage businesses to reduce pollution. California has also approved proposals to aid in the transition to electric vehicles, among other renewable energy programs.

Brown stated that legislative action best lets the country know how serious California is taking threats to the environment.

After nearly two years of debate over funding for the initiative, the bill narrowly passed the Legislature last month. The opposition argued that completely putting a stop to fossil fuel energy production within twenty-seven years wasn’t even possible, and would ultimately backfire. Supporters of the initiative however held that the new law is an indispensible step in guaranteeing California to effectively fulfill its sustainability goals and lead the nation with its efforts. Former Gov. Arnold Schwarzenegger publicly supported the state’s efforts to stand as leaders in the world for the cause of renewable energy.

The law will take effect in January of 2019, but does not include a specific blueprint for how the state plans to achieve its goal. Proponents of the bill attest that the act of officializing the state’s goals help to provide scientists and the energy industry the confidence of knowing there will be a large market for clean power technology without holding reservations as to its projected development.

It is no coincidence that the goal of this bill works also to enforce the Solar Mandate set by the California Energy Commission, requiring that all new homes built in the state include solar panels starting in 2020.

“SB 100 sends a clear signal to folks in laboratories, folks in board rooms to have the security of knowing that the fifth-largest economy in the world is moving toward clean energy,” said Assemblyman Todd Gloria (D-San Diego).

The signing of SB 100 sets the tone for the state’s climate credentials coming into the global climate summit which is slated to begin in San Francisco on Wednesday. Over the course of three days, 4,000 delegates are expected to discuss the urgency for renewable energy as fossil fuels become increasingly scarcer and green alternatives become more readily available.

De León added that California would continue to forward environmentally-conscious initiatives regardless of the support of the Trump administration.

“Today California sends an unmistakeable message to the nation and the world. Regardless of who occupies the White House, California will always lead on climate change,” said De Leon in a spirit of defiance.

Gov. Brown also mentioned that he was signing an executive order leading California to reach carbon neutrality by 2045, by removing as much carbon dioxide from the atmosphere as it discharges. The order compels state regulators to account for carbon emissions from natural sources, such as wildfires, while organizing California’s path forward. The measure also supports regulators to sequester greenhouse gases, such as policies aiding in state forest preservation, as a means to counter the effects of carbon emissions.